skip to main | skip to sidebar

Thursday was a humid, overcast day with quite a bit of rain which lasted into the night. On Friday morning, R. and my daughter K., who is visiting from West Virginia, got me out of bed to watch the incredible sight of swarms of flying ants in nuptial flight. Each swarm swirled around like a dust devil.
(Click on photos to see enlargements in a separate window.
Use the Back button on your browser to return to the blog post. ) 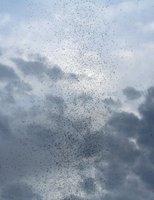 Then we saw that many of the ants were raining straight down from the swirling mass. We could hear them hit the roof and the ground.

Some Internet research led me to the web site, Ants of the Southwest. There are three pages describing, Acromyrmex versicolor, a type of leafcutter ant. 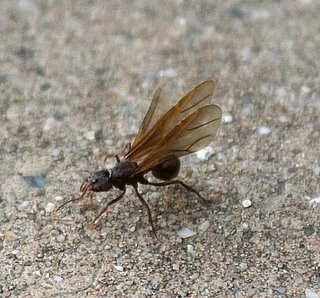 This web site indicates that "after the female Acromyrmex versicolor falls to the ground, lots of males attempt to mate with her." However, K. observed that in most cases the ones that were raining down were already coupled, 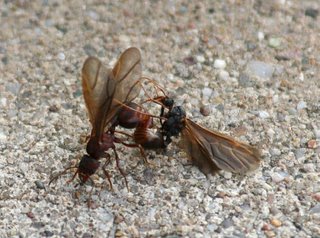 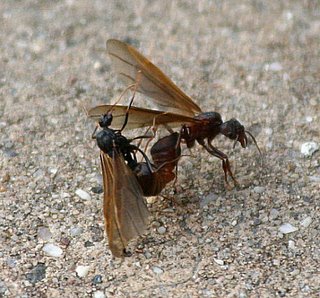 although we did on occasion see other males join the mating pair.

After they had finished mating, they walked away from each other and flew off. The swarms eventually dissipated and most of the ants disappeared. A few, unfortunately, drowned in the deeper puddles.
Posted by Pam in Tucson at 7/29/2006

Wow! What a great set of photos. I've never seen anything like that-- swarms of flying ants, culminating in mating on the ground (or in mid-air). Fantastic.

omg, I thought they were birds!! Don't they bite? incredible photos Pam :)

what a unique sight that must have been. Great you had your camera ready. How long did the whole thing last?

How completely bizarre (to me, with me not being an ant) and marvelous. Glad you got to witness and take pics.

ra - We'd never seen anything like it either and we were somewhat concerned. Luckily a couple passing by told us what it was and also that those ants are quite harmless, so we set out to just enjoy the experience.

cindy - No, they don't bite. Several pairs landed on me and I just brushed them off. They weren't deterred at all from their main objective.

daniel - It was truly amazing. I was afraid we'd end up with thousands of dead ants, but these ladies don't kill their mates and everyone quietly disappeared after about 90 minutes.

idyllopus - Thanks for visiting my blog again. It was indeed bizarre to this human and truly marvelous.

That is an amazing swarm. I saw one on Friday, but it was much smaller. Alex Wild (a wonderful scientist and photographer who is now at the U of A) photographed some recently too:
http://www.myrmecos.net/new.html
-your ant fan

Interesting and neat ant report. Thanks for sharing this event!

Michele - Thanks for visiting my blog and for the link to Alex Wild's great web site. He is a wonderful photographer and his site is fascinating. I was happy to have confirmation on my ant identification.:) I visited your blog - it's great! - I hope you'll continue blogging.

ow - You're very welcome. There were several smaller swarms in the neighbourhood this morning, but none were quite as spectacular as yesterday's. I realize now that I've seen very small swarms of them before, but have never paid much attention.

Amazing sight. We usually get a day in the summer when the flying ants come out but nowhere near as many as you saw.

I wouldn't've believed it if I hadn't seen it on Blogger! Amazing! They look so big!

That is what I remember most from being in Tucson in the monsoons, the insects and sometimes huge ones that I still have no idea what they were would beat against the window. It really is nearly a mystical time down there when the rains come and the desert becomes something else. I actually love to be in Tucson in August about as much as any time. It's exciting with the storms, the growth in the desert from the rains.

Very cool the second time viewed, Pam. I was pleased to see this post in Circus of the Spineless.

Cool blog you got here. I'd like to read more concerning that theme.
BTW look at the design I've made myself High class escort

I was attacked for ants when I was at a camping day but with every bit of strength I had I got rid of them Buy Viagra Cheap Viagra.

Pam in Tucson
I retired from the University of Arizona, where I coordinated distance learning. New enthusiasms include learning about digital photography and photoprocessing, archaeology, theatre, and observing the natural world around me.

All original content on this weblog, including the archives, is licensed under a Creative Commons License and is copyrighted by the author. Images may not be used without permission.